Musings on Our Recent Trip to Mysore and the Breath.

I have been meaning to comment on our trip to Mysore for some time now, and have finally sat down in front of the computer to do it. Victoria, Holly, Isla and I stayed in Mysore for 5 weeks in July and Aug. of this year. The trip did not start in an auspicious manner when we found out 3 weeks before we were due to depart that the Shala was going to be closed. By then it was too late to change our plans so we decided to go ahead. This had happened to Victoria and I before back in 1996 I think. We heard the Guruji was going away just before we went over. Again, we decided to go anyway and at the last minute, Guruji cancelled his trip and we had a great time with very few people there because they had all thought he would be away. 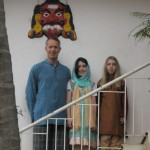 Mike, Holly and Isla at Alex's

On the latest trip, we were going with no expectations for the yoga, but looking forward to a great break. We were lucky enough to stay in Alex Medin’s house in Gokulum, about 5 minutes walk to the Shala and to Gokulum village. Staying here was very easy and relaxing. The streets are clean, there is no-one hassling you and you can walk around relatively unmolested. There is every thing you could want in the area so there is no real need to travel into the inner city. Though I love central Mysore, Holly and Isla found it a bit intimidating, noisy, smelly and crowded.

It turned out that I was extremely blessed with my Yoga experience again. I was fortunate enough to enjoy classes with Saraswathi, Sharath and Peter Sanson, with very few students. The highlight was having a week of classes with Sharath with only myself and 2 good friends. Getting another week with Saraswathi with just 6 to 8 of us was also very special. 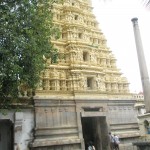 Sharath was in holiday mode gathering his energy for another trip overseas. We in the Ashtanga world put so much expectation on Sharath that I am not surprised that he gets worn out. I average about 150 students a week and get very tired unless I have a break. Sharath has to deal with that number every day at times! I don’t know how he does it. His adjustments are sublime and the passion and integrity he has are amazing. And he is still so young. If he is this good now, I look forward to visiting him in Mysore as often as we can afford into the future. 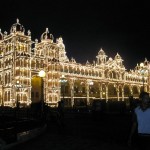 This was the first time I have practised under Saraswathi’s direction and I loved it. Her energy reminds me so much of Guruji. With so few students she was full of help and light and laughter. She had time to give us pointers on the little things and her adjustments are fantastic. In over 19 years of Yoga practice I have now had 4 teachers. Guruji, Sharath, Peter Sanson and now, Saraswathi. I am humbled by them, and bow at their feet.

I have been asked many times since we got back what I learned from my latest trip. I learned that the Ashtanga Vinyasa method is in good hands. On a personal level, no new postures (in fact I was not practising up as far as I was last time I was in Mysore), but lots of learning around the breath. My focus quickly came to the quality of my breath and how deeply this influences the practice. The quality of puraka (inhale) dictates the quality of the following rechaka (exhale) and the quality of rechaka dictates the quality of the following puraka, and so on. This is so fundamental to the practice that you think it would be the first thing you learn. Steady breath leads to steady practice and steady focus. Steady breath energises you, whereas ragged breath tires you out. With a steady breath anything is possible. It is far too easy to forget this and it is also not as easy as it sounds. As with the practice in general is takes practice, practice and more practice.