With the proliferation of different styles of yoga these days I wonder if an essential aspect is being down played. This is the concept of “paramparā” or a succession of 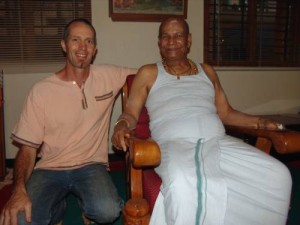 teachers in a traditional lineage. Intrinsic to this concept is the one of “Guru” (teacher) and “śiṣya” (disciple) or “sādhaka” (spiritual aspirant). All the traditional texts say that it is essential to learn and practice yoga under the guidance of a Guru. It seems to me that yoga as it is practiced in the West, is moving away from this as it is considered more and more as a type of physical exercise rather than a way of establishing the mind in the Self. Thus we have a situation where there is little or no connection between the Yoga teacher and the person taking the class. Indeed, some classes are being taught purely from a defined script!

Why is there this reluctance to follow tradition or even to really seek out a Guru to guide one through the Yoga practice? Part of it is cultural arrogance. We are taught that we know best and that modern science has all the answers. Part of it may stem from the bad publicity there has been around some leading “Gurus” in the yoga world failing to live up to their own lofty ideals. A lot of it is our ego being unwilling to surrender to Guru.

Is surrender to the Guru a necessary aspect of the Guru-Shishya relationship? The best way for me to answer this is to perhaps explain my relationship with my Guru, Sri K Pattabhi Jois. I first met Guruji in 1994 in Mysore in Southern India. At that time I was interested in Yoga as a physical practice as well as being a little curious about the deeper meaning of it. I was in no way looking for a Guru and yet part way through that trip Guruji made it plain to me that if I was willing to accept him as my Guru, he would be that for me. He did this, not by stating it in words but merely by a look into my eyes and by his actions in the shala. Central to our relationship has always been my decision to take him as my Guru. This never stops. Every day when I chant the mantra before I start my practice, I reaffirm this decision. I decide again that I will practice the method that Guruji taught me.

Does this mean that I took Guruji as my guide in other aspects of my life? Not necessarily. In terms of my Yoga practice, I have never questioned him. But in terms of my working life, my diet and my relationship to my parents, family and friends there is a cultural divide that means I make my own decisions. I use what I have learnt through the practice Guruji taught me, to inform those decisions. Guruji taught me to always be attentive, to always question, never to believe what I did not experience for myself, but to do this in the environment of a daily practice of Ashtanga Vinyasa Yoga.

So where did Guruji’s passing leave me? The Ashtanga Yoga community is fortunate that there has been a passing down of the lineage. Sharath spent many, many years practicing, assisting and studying under the guidance of Guruji and I have no qualms in accepting him as my Guru. I have also been very lucky to have Peter Sanson as my “junior Guru” because he has spent some time in Mysore every year for the last 30 years or so. No-one in the West has a deeper understanding of traditional Ashtanga and of my own practice than Peter. This means that I have neither the need nor the desire to seek guidance any where else.

For me, the time spent learning directly from the Guru is essential to the true passing of knowledge or paramparā. We in the West are too quick to want to change things, to make things better. Yes, yoga will evolve. In fact, people were always accusing Guruji of changing things, and they are doing the same with Sharath. Change will happen but it must happen from the basis of having already surrendered to the Guru and to the method and having practiced for a very long time. Krishnamacharya was a ground breaker in terms of the Yoga practice, but if you read his biography you know that he first spent many, many years in traditional study. I was lucky enough to spend a small amount of time with Guruji and now with Sharath and Peter. My position is at the end of this line and that means that I continue to practice and to teach staying as true to that lineage as I can. It seems a shame to me that so many people practice “Yoga” without ever experiencing a relationship with a Guru or indeed, thinking it necessary. Instead, many people prefer to mix and match teachers and styles of yoga in whatever way suits themselves. This is not yoga in the traditional sense because that is the practicing of one method under one Guru.